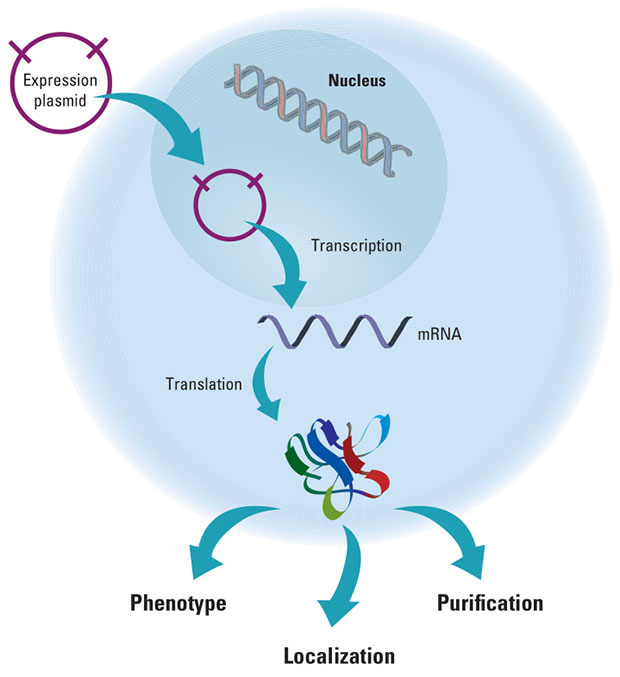 During gene transcription, usually, only one strand of DNA is copied. This is called the template strand and the RNA molecules produced are single-stranded messenger RNAs (mRNAs). The DNA strand that would correspond to the mRNA is called the sense or coding strand. In eukaryotes (organisms that have a nucleus), the initial product of transcription is called pre-mRNA.

The pre-mRNA is extensively edited through splicing before the mature mRNA is produced and ready for translation by the ribosome, the cell organelle that serves as the site of protein synthesis. Transcription of any gene takes place at that gene’s chromosomal location, which is a relatively short segment of the chromosome. The active transcription of a gene depends on the need for the activity of that particular gene in a specific cell or tissue or at a given time.

Small segments of DNA are transcribed into RNA by the enzyme RNA polymerase, which achieves this copy in a strictly controlled process. The first step is to recognize a specific sequence in the DNA called a promoter that signifies the beginning of the gene. The two DNA strands separate at this point and RNA polymerase begins copying from a specific point on a DNA strand using a special type of sugar-containing nucleoside called ribonucleoside 5′-triphosphate to start the growing strand. 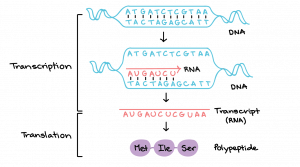 Additional ribonucleoside triphosphates are used as a substrate, and by cleavage of their high-energy phosphate bond, the ribonucleoside monophosphates are incorporated into the growing RNA chain. Each successive ribonucleotide is governed by the complementary base pairing rules of DNA. For example, a C (cytosine) in DNA directs the incorporation of a G (guanine) in RNA. Similarly, a G in DNA is copied to a C in RNA, a T (thymine) to an A (adenine), and an A to a U (uracil; RNA contains U instead of the T in DNA). . Synthesis continues until a termination signal is reached, at which point the RNA polymerase separates from the DNA and the RNA molecule is released.

Ahead of many genes in prokaryotes (organisms that lack a nucleus), there are signals called “operators” where specialized proteins called repressors bind to DNA just before the transcription start point and prevent access to the DNA by part of the RNA. polymerase These repressor proteins thus prevent gene transcription by physically blocking the action of RNA polymerase. Repressors are usually released from their blocking action when they receive signals from other molecules in the cell that the gene needs to be expressed. Upstream of some prokaryotic genes are signals to which activator proteins bind to stimulate transcription.

Previous article
A practice guideline from the American College of Medical Genetics and Genomics and the National Society of Genetic Counselors: referral indications for cancer predisposition assessment.
Next article
Chromosome Inversion